skip to main | skip to sidebar

We took Teasel up to Cheltenham to meet Caroline's sister's family, and their 10 month old dog, Sam. Sam is quite a big dog, and when they played Teasel's favourite game seemed to be trying to fit her head inside Sam's mouth.

It was a cold day. We went for short walks at Daisybank and at Cleve Hill - where there was a spectacular hoar frost. Teasel was quite happy to run around wearing her fleecy coat, but it was too cold for some of the humans so we set off to get some lunch.

And so we took Teasel to her first pub - The Royal Oak at Andoversford. Once Teasel had been around the pub to see what was there she settled down and sat while we ate, with occasional forays out to the car park to give her the opportunity to relieve herself.

We took Teasel to Badocks Wood, which was recommended to us by the owner of Ruby, a Border Terrier in Teasel's puppy class.

Teasel successfully crossed the stream, which is actually the River Trym on it's way to the Blaise Castle Estate.
Posted by Jim at 8:09 PM No comments:

Teasel had her first visit to the groomers today.

While she was there it was the first time we've had some time to ourselves without Teasel since she arrived. It felt a bit strange to be in the house with no dog.

When we dropped her off she had been a ball of puppy fluff, but when we picked her up she was a tiny little dog.

Although as you can see from the picture, she looks a bit displeased with the whole experience.
Posted by Jim at 7:59 PM No comments:

We took Teasel to meet some friends who live in Chalford, near Stroud.

After we got there Teasel was happy exploring the kitchen and sitting on Phoenix's lap chewing her Kong, and sleeping in her crate while we ate.

After the meal we went for a little walk. Teasel was particular interested in watching a flock of doves that circled around above us, and less interested in the horses and sheep in the fields.

We took a short cut through a muddy wood to a muddy path and several stream crossings (actually crossing the same stream three times). The first two times she looked like she was trying to find a place to cross, but couldn't manage it, so had to be lifted over, but at the third crossing she leapt straight over the stream.
Posted by Jim at 11:47 PM No comments:

I took Teasel to Ashton Court again. We started from the Bower Ashton car park and set off towards the Deer Park. I let Teasel off the lead once we were out of the car park. There was wire around the fence of the Deer Park that meant Teasel couldn't get in, but while I was taking photos of the deer she slipped under the gate and was investigating some deer poo. I shook the dry treat container and she came back without taking any interest in the deer.

A Grand Day Out

We decided to take Teasel to see the sea today. So we took her to Clevedon. We walked along the sea front and met some other dogs, and then picked our way over the boulders to the beach. Teasel was interested in the pebbles and the sand, but most interested in the seaweed that was there.

We walked to the Marine Lake and look-out at the end of the beach and then back along the sea front. I let Teasel off the lead, but she went to investigate an amusement arcade and I had to go in and fetch her back.

We drove over to Cadbury Garden Centre to get some food, as dogs are allowed inside. We met an 8-month old Giant Schnauzer there, and Caroline managed to get a photo of it with Teasel. In the pet section there we got Teasel a larger dog bed.

However I can't recommend the food at Cadbury Garden centre. I passed on the soup, because what little there was left looked as though it had been stewing away for a long time. So I ended up with a quite expensive option of vegetable lasagne and chips. Only to be struck down a few hours later with an extremely upset stomach.
Posted by Jim at 11:31 PM No comments:

Teasel managed to remove the piece of 2mm climbing cord that has been tied around my right ankle since 1994. I climbed at Paviland then, and was intrigued by the many bits of protection that consisted of 2mm cord threaded through holes in the rock. I wondered how resilient this form of protection was, so I tied a loop of 2mm cord around my ankle to see how it survived.

Interestingly Teasel has managed to remove the cord, not by chewing through it (although she had chewed through the tails of the knot some time ago), but by actually untying the knot.

So my advice to anyone climbing at Paviland would be not to take any puppies on the route with them.
Posted by Jim at 11:24 PM No comments:

Walking In The Rain

Teasel doesn't like getting wet, and she also doesn't like wearing the posh waterproof coat we got for her. She tends to plant her feet with her head down and refuse to move. This makes taking her out for a walk in the rain a tricky affair. 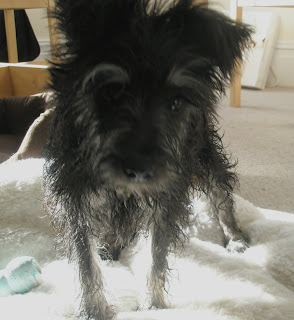 Caroline had been taking Teasel out for a walk and came back with a very damp dog. On the way back from St. Andrews Park, they had been invited in by a neighbour. Teasel had been running around in the garden and suddenly disappeared into the pond. We dried her off and she had a sleep.

Then, as I was preparing to take Teasel out for a walk to Redland Green - our second closest park - I heard Caroline calling from the garden. Teasel had fallen into our pond. She came out covered in duck weed, which necessitated another dunking in the sink.

After three immersions in a day, perhaps she'll be a bit more careful.
Posted by Jim at 8:57 PM No comments:

We drove over to the Coombe Dingle end of Blaise Castle to introduce Teasel to a stream.

Teasel was quite athletic along the path, jumping up onto and running along a slippery log. She was also quite adventurous on the steep banks of the river, and when we got to the bridge she rushed up to the edge and looked over the 15ft drop to the stream below - much to Caroline's unease.

I found a place where the river was accessible and Teasel came down and had a sniff and a drink and a little paddle in the water.
Posted by Jim at 8:46 PM No comments:

Today we took Teasel to Eastville Park. I'd been there before on a walk with Colin and Jack (the dalmatian) before we got Teasel.

Today we just walked around the lake, and Teasel was very interested in the various waterfowl in there, as well as the water itself. But she doesn't like getting wet, so fortunately didn't show any signs of jumping in.

We also met a Basenji during the walk (although we didn't hear it yodel).
Posted by Jim at 8:45 PM No comments: